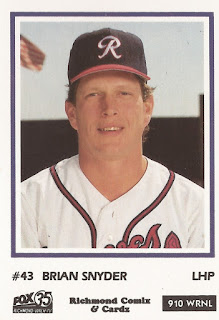 Young Brandon Snyder was playing at short-season Aberdeen in 2006. It was a year after he was taken by the Orioles in the first round. He was also a year out of high school.

“It’s difficult for a 19-year-old to adjust to,” Snyder’s father, Brian Snyder, told the Laurel Hill Connection that July. “I don’t think playing was much of an adjustment, but the idea that it’s a job. That part of it is a little bit difficult.”

The father spoke to The Connection as not just a father. He was speaking as someone who spent 12 years getting paid to play baseball, and someone who had a major league job twice.

That baseball job started for Brian Snyder in 1979, taken by the Mariners in the seventh round of the draft out of Clemson University. The pitcher went to work that year at single-A Alexandria, posting a 2.03 ERA in six starts.

Remaining at single-A through 1981, Snyder posted a 1.48 ERA at Wausau that year, that was after a 5.67 mark the year before at San Jose. But his 1981 numbers were enough to help him jump past AA and go right to AAA Salt Lake City for 1982.

That jump to AAA was the first of three years at Salt Lake, without getting the call-up to Seattle. He wouldn't get that until 1985, called up from the Mariners' new AAA home in Calgary.

His first two years at Salt Lake, Snyder served as mainly a reliever, posting ERAs over 4 both years. The Deseret News described Snyder upon his arrival as a left-handed reliever who used mostly fastballs and curves. He got his second save of 1982 in late May, finishing out a 3-1 win. In one August 1982 game, Snyder got the final out on one pitch.

In 1984, Snyder returned to starting, his ERA increasing north of six. When he wasn't pitching that year, Snyder was handing out awards to newspaper carriers.

But by June of that year, Salt Lake manager Bobby Floyd was noticing he had two pitchers throwing well, but Snyder and two others weren't.

In 1985, at Calgary, Snyder split between starting and reliving, with a 4.00 ERA between them. But he did well enough to get the call-up to Seattle by late May.

Snyder made his debut on May 25. The then 27-year-old struck out seven and gave up only one earned run, before being pulled after 4.2 innings. He was chased in his debut by, of all things, a blister.

His next outing, on June 2, wasn't as good. In 4.1 innings, he gave up four runs. On June 7, Snyder was lifted after just one inning of work, though after giving up just one run. It was a return of the blisters that chased Snyder again.

In all, Snyder pitched in 15 contests for the Mariners that year, his ERA ending a 6.37. He was released at year's end. He would return to the majors, but not until four years later, with Oakland. In the meantime, Snyder spent two years with the Padres at AAA Las Vegas, his second year posting a 2.60 ERA in 39 mostly relief appearances.

It was a brief call-up. He got into only two games. But he was back. In those two games, he gave up a home run to Fred McGriff. In his second, he walked two, gave up a hit and didn't record an out. It was his final major league appearance.

Snyder had one more year in professional baseball, with the Braves at AAA Richmond in 1990. In 45 appearances, Snyder posted a 2.48 ERA in 46 appearances and he was done.

Snyder has gone on to head up his own baseball academy, Snyder Baseball & Softball in Virginia. As for his son, Brandon Snyder got the job he wanted this past September, getting called-up to Baltimore and playing in 10 games.