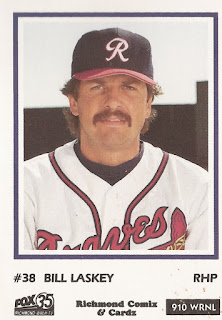 Bill Laskey made it to the majors for the first time in April 1982. He also had about as good of a first start as anyone could hope - a complete game, three-hitter.

"I was nervous the whole first inning," Laskey told The Associated Press. "But then I settled down and started getting ahead of the batters. I didn't think people knew me here, but then they started chanting my name by the end of the game."

Laskey ended up getting 13 wins for the Giants that year and 13 more the next. He ended up pitching in a total of six big league seasons, his professional career not ending until 1991.

Laskey's professional career began in 1978, taken in the second round of the June secondary draft by the Royals out of Kent State University.

Laskey hit AA in his first year with the Royals, then AAA Omaha in 1980. For 1982, he was traded to the Giants in a three-player deal. He also then made his debut with San Francisco.

He ended up getting 31 starts for the Giants in 1982, spending almost the entire year in the majors. He went 13-12, with a 3.14 ERA. In a May start, Laskey lasted into the seventh for a win against the Expos.

"That's actually the first time I've felt relaxed on the mound," Laskey told UPI after the Expos win, noting he'd faced several of the players the previous year at AAA. "That helps a lot, but it works both ways because they know how I can pitch and I know how they can hit."

Laskey returned to the Giants for another 25 starts, picking up another 13 wins. By the end of May, he had also picked up seven-straight wins.

Laskey didn't stop playing, though, until 1991, playing in the Royals, Braves and Rangers systems to end his career.

Since his retirement, Laskey has stayed involved with sports. He's served as a softball coach at Aragon High School in San Mateo. He also serves now as an analyst for Comcast SportsNet Bay Area and as an ambassador for the Giants.