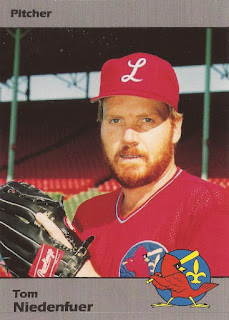 Tom Niedenfuer pitched a decade in the bigs. He played entirely in relief, saving nearly a hundred games.

But the two games he didn't save are perhaps the games he's best remembered for, where the Dodger closer gave up two key home runs to the Cardinals in the 1985 National League Championship Series.

"Looking back on it," Niedenfuer told The Los Angeles Times a quarter century later, "it's a very proud feeling that your manager had enough confidence in you to be the guy he put in that situation. I wouldn't trade that for anything in the world because I loved being out there. But when it happened, all I can remember is … you let the team down."

Niedenfuer's career began in 1980, signed by the Dodgers as an amateur free agent out of Washington State University.

Niedenfuer also saw time in the 1981 postseason for the Dodgers. He got into four games, two of them in the World Series. He gave up no earned runs in five innings of work in the Fall Classic.

He struck out seven in four innings of work in an August 1983 game. "I had good control and a lot of rest," Niedenfuer told The Associated Press afterward.

Neidenfuer got into 64 games in 1985 and saved those 19. His postseason trouble began in Game 5 of the NLCS when he gave up a walk-off home run to Ozzie Smith. Then, two days later in Game 6, he gave up another ninth-inning home run, this one a three-run shot to Jack Clark.

"Nobody feels worse in the entire United States than he does," Dodgers manager Tommy Lasorda told reporters later. "He feels worse than anybody."

Niedenfuer stayed with the Dodgers into 1987, when they traded him to the Orioles. He saved 18 games for Baltimore in 1988 in limited chances.