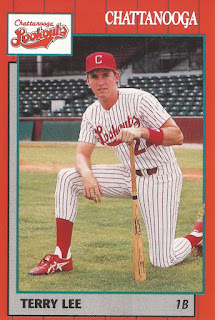 Terry Lee made AAA by his fifth season as a pro, then a mysterious injury threatened his career, according to The Cincinnati Enquirer.

The injury involved his ankle, the cause unknown. The injury forced him to miss the entire 1987 season and slowed him upon his return - until 1990, The Enquirer wrote.

"I'm not taking anything for granted now," Lee told The Enquirer. "The last year I played pain-free was 1985, and I took things for granted. I look back on it now and kick myself . . . I think that's why I've been so successful this year."

Lee spoke to The Enquirer in September 1990 on the occasion of his first call up to the majors.

Lee went on to see he majors in that season and the next. He got into 15 games in all, picking up four total hits. He played in 14 professional seasons in all, ending in 1997 with independent Winnipeg.

Lee's career began in 1982, signed by the Reds as an undrafted free agent out of San Luis Obispo High School in California.

He made AAA Denver for 1986, but then came his ankle problem. He got into only 34 games that year and missed 1987. He returned for 25 games at single-A Greensboro in 1988 and 64 games between AA Chattanooga and AAA Nashville.

Lee again split 1990 between Chattanooga and Nashville. Then, in September, he go his call up to Cincinnati. He got into 12 games for the eventual world champions. He went 4 for 19 and knocked in three.

When the Reds made the postseason, Lee got the call for the World Series roster. He didn't get into a game, but he did get on deck, he recalled years later.

"The next inning, I wasn't sure if I should go back out there," Lee told The North Hills News Record in 1995, "and by the time I asked. Hal Morris was going up. I've often wondered why I didn't just grab a bat and go out there."

Lee returned to Cincinnati for three games in 1991. He played the rest of the year at Nashville. He then played 1992 at AAA with the Indians and Twins, then 1993 in Mexico.