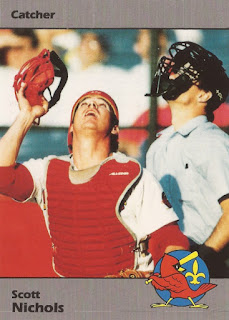 Colby Rasmus has been doing well for himself on the Cardinals since his debut last year. Scott Nichols is someone who saw that talent five years ago.

A long-time scout for the Cardinals, Nichols recalled in 2005 seeing a good high school team in Alabama, one that included the outfielder Rasmus, according to Baseball America.

"I remember walking out of there the first time I saw them saying, 'That right there is a good high school baseball team,' " Nichols told Baseball America that year, after Nichols' signed the 28th rounder that year.

"Those games were incredible displays of dominance," Nichols said later of a Rasmus display in the high school playoffs. "Colby's last home run was a monstrous bomb."

Nichols himself never got a chance to do well for himself in the majors, never getting there to get the opportunity.

Nichols, sometimes credited by his given name Gary Nichols, began his own career in 1985, signed by the Cardinals. Nichols played that year at short-season Erie.

He stayed in A-ball through 1988, spending time at St. Petersburg in 1986, Savannah in 1987 and Springfield in 1988. The catcher played the most at Savannah, recording 94 games. But his average was never there. The year at Savannah was he one where he hit his best, .236.

He also never really had power. In 1986, Nichols hit two home runs on the year. One of those came in July, when he ignited a four-run rally with a home run over the left field wall, according to the St. Petersburg Evening Independent.

Nichols was one of the players St. Petersburg manager Mike Jorgensen pointed out that August as a stabilizing force on the team in the face of player loss to promotion, according to The St. Petersburg Times.

"These guys feel like they want to play a little better because they want to be the next guy to go," Jorgensen told The Times before listing off all the players lost to promotions.

Nichols himself wasn't promoted to AA until June 1989, playing 20 games at Arkansas and hitting .240. He split 1990 between Louisville and Arkansas.. He drove in a run for Louisville in an April 4-1 victory at Des Moines. He played 1991 back at Louisville, his final year as a player.

But his career has continued with the Cardinals with his scouting work.