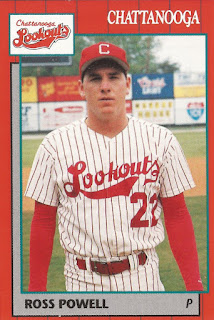 Ross Powell looked back what got him to the majors in 1993 and he cited a mid-season move to consistency, he told The Indianapolis Star.

"I learned I couldn't just get by with good stuff," Powell told The Star. "I have to be able to use my breaking pitches and location to be successful. I'm just going to go up there and work hard and hope to make the most of it."

Powell went up there and saw time in nine games for the Reds. He then went on to see time in two more, with the Astros and Pirates. In all, he got into 48 major league games over three big league campaigns.

Powell's career began in 1989, taken by the Reds in the third round of the draft out of the University of Michigan.

He started with the Reds at single-A Cedar Rapids. He moved to AA Chattanooga for 1990, getting a brief look at AAA Nashville. He went 8-14 on the year, with a 3.55 ERA.

Then, in September 1993, he got his shot with Cincinnati. He got into nine games, starting one. He gave up eight earned in 16.1 innings of work.

He moved to the Astros for 1994, getting into 12 games in relief and posting a 1.23 ERA. He started 1995 back with Houston and got into 15 games before moving to the Pirates mid-season. He took the loss in his first game with his new organization, on a three-pitch outing.

"I just wanted to throw strikes," Powell told reporters afterward after giving up a home run. "Unfortunately, I left a ball up in the zone."

Powell ended the season with 27 outings between Houston and Pittsburgh and a 6.98 ERA.