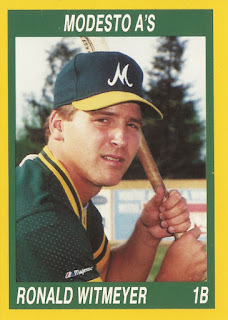 Witmeyer's career began in 1988, taken by the Athletics in the seventh round of the draft out of Stanford University. He's also credited by his formal name, Ronald Witmeyer.

"Our gratification comes from watching all the participants get really excited about being at the facility," Witmeyer told 92127 Magazine in 2010. "And it is really special to see the kids improving in all aspects of the game."