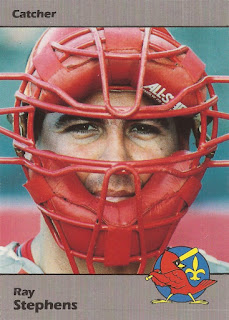 Ray Stephens had 11 major league games under his belt, five in 1990 and six in 1991, all with the Cardinals. Now, in spring training 1992, the Phillies were looking for backup catcher and they were looking to Stephens.

But it was a brief look. Stephens went 3 for 23 for the Phillies that spring, according to The Reading Eagle, and Phillies GM Lee Thomas was polite in his comments.

"That job is still up in the air, and that's all I care to say about it at this point," Thomas told The Reading Eagle in late March. "I'm sure there'll be some free agents walking around out there soon, and we'll take a look."

Stephens didn't make the Phillies that spring. But he did get one more look at the majors.

By June, Stephens was traded to the Rangers and by July he was in Texas for eight more major league games. The time with Texas brought his major league game total to 19, where it would remain.

Stephens' career began in 1985, when he was selected by the Cardinals in the sixth round of Troy State. He saw time that year at both short-season Erie and single-A Savannah. He hit .222 on the season.

He returned to Savannah in 1986, then jumped directly to AAA Louisville, getting a 12-game look with the Redbirds, hitting .194. Stephens spent 1987 largely at AA Arkansas, alternating from there between AA and AAA through 1990.

In an April 1988 game with Louisville, Stephens helped the Redbirds get out to a 4-0 lead with a fourth-inning single. A double in June game helped Louisville to a 4-2 win. That spring, Stephens hit a home run in a Cardinals spring training win, before being sent to Louisville.

Stephens hit another home run in spring training 1990, hitting it leading off the ninth inning to tie the game. But he was sent back to Louisville. It was in September 1990 that Stephens got his first look at the majors, with St. Louis, called up Sept. 3.

Stephens saw his first action Sept. 20, getting his first major league hit in the sixth inning. It was a home run. It was the first of two hits Stephens got that year in 15 plate appearances, the other was a double.

Stephens returned for 1991, to Louisville. He got back to St. Louis with another September call-up. He struck out on three pitches in a Sept. 13 game.

By spring 1992, Stephens was in Phillies camp, competing for the backup catching spot. But by June, with a season spent at AAA Scranton, Stephens was shipped to Texas for a player to be named. He was called up in late July, getting into two games before another late September call-up.

In one late September game, Stephens and the Rangers ran into Randy Johnson. Johnson struck out 18, three of the strikeouts were of Stephens. But these were Stephens' final games in the majors. He hung on one more year in the minors, at AAA Oklahoma City, ending his career.