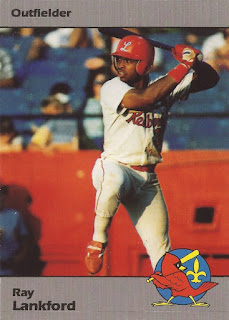 In one September 1991 game, Ray Lankford single-handedly won the contest, knocking in the Cardinals' only runs and cutting down the potential game-tying run for the final out, The Associated Press wrote.

The next night he just went out and hit for the cycle.

"He's had some kind of 24-hour period," Cardinals manager Joe Torre told The AP after the second game.

Lankford was completing his first full season in the majors that year, a season where he came in third in the Rookie of the Year voting. He went on to have some kind of career, becoming a regular in the Cardinal outfield for a decade and seeing time in 14 total big league seasons.

Lankford's career began in 1987, taken by the Cardinals in the third round of the draft, out of Modesto Junior College.

"Lankford doesn't scare," Torre told reporters afterward of the showdown. "You may get him out, but he doesn't give."

By 2004, though, Lankford was back in St. Louis, to close out his career where it began. He got into 92 final games that year, hitting .255. In his final official at bat, Lankford hit a home run, the 238th of his career.

"It might be my last regular-season game, period," Lankford told The AP afterward. "I thought about all of that. It was great just to go up there and hear the fans cheering for me."