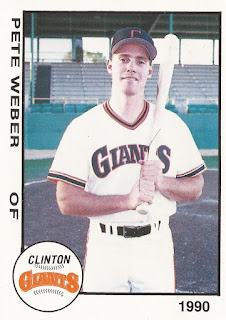 Pete Weber broke out for the AA Shreveport Captains in this May 1993 game. He knocked two doubles and a home run to drive in three runs, The Tulsa World wrote.

Weber played in that game, but it was a brief bright spot in an otherwise down season. He hit just .194 on the year, his fourth in the Giants system. He played just one more season. He never made the bigs.

Weber's career began in 1990, signed by the Giants as an undrafted free agent out of the University of California-Riverside.

Weber hit well at Riverside. He hit .409 in 1990 and won conference player of the year honors. He ended the year near the top of the conference in RBI and batting average. He hit a double in a March game.

With the Giants, Weber played his first season between short-season Everett and single-A Clinton. He hit .316 over 40 games at Everett, including a three-run home run in an early September contest. He hit .271 in 31 games at Clinton.