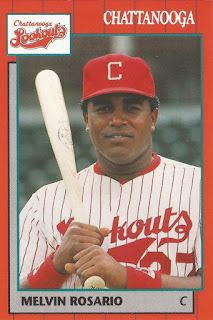 Ron Guidry had a message for his catcher Mel Rosario in this May 1987 rehab game with single-A Fort Lauderdale. Essentially, according to The South Florida Sun-Sentinel, no special instructions needed.

"I didn't worry about locations especially in the first inning," Guidry told The Sun-Sentinel. "I just told the young catcher (Rosario) to put the glove up there."

Rosario got the opportunity to catch the major leaguer Guidry in his fourth professional season. Rosario went on to catch in seven seasons in all. He never got to catch a major league pitcher in the bigs.

Rosario's career began in 1984, signed by the Dodgers as an undrafted free agent out of his native Puerto Rico. Rosario is also credited by his full name, Melvin Rosario.

Rosario split time between Fort Lauderdale and AA Albany-Colonie in 1988. He got into 42 games total. He then returned to Fort Lauderdale for 1989 and saw a career-high 89 appearances. He hit .228.

He hit a two-run home run in a July 1989 game and a key single in another game that month. That December, the Reds took him in the minor league draft.