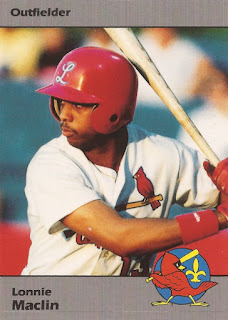 The St. Louis Cardinals had no shortage of speedy young outfielders in 1991, among them Bernard Gilkey and Lonnie Maclin.

Speaking to The Louisville Courier-Journal that April, Maclin expressed optimism that he would see St. Louis, like Gilkey.

"I'm as hungry as Gilkey was," Maclin told The Courier-Journal. "Hey, I've got to get on with it. This is St. Louis, my hometown and Gilkey's. We have more opportunities there than anybody else."

While both Maclin and Gilkey made St. Louis, only one went on to a long major league career. Gilkey went on to play in 12 major league seasons. Maclin only saw a brief stint in one.

Maclin, however, had himself a long professional career. He played in 16 seasons in all, including a long stint in independent ball.

Maclin's career began in 1986, taken by the Cardinals in the third round of the June secondary draft out of St. Louis Community College.

He started at rookie Johnson City. He hit .301 in 62 games and stole 22 bases. He moved to single-A Savannah and single-A St. Petersburg for 1988 and single-A Springfield for 1989.

Maclin hit AA Arkansas and AAA Louisville for 1990, as well as St. Petersburg. He hit .331 overall that year, including .310 in 17 games at Louisville.

That winter, Maclin honed his skills in winter ball in Puerto Rico. "Overall, it was worth it," Maciln told The St. Louis Post-Dispatch of his time on the island.

Maclin played that year and the next at Louisville. Then, in September 1993, he got his shot at St. Louis. He got into 12 games, 14 at bats and picked up one hit and one stolen base.

Maclin didn't return to the Cardinals organization for 1994. He instead turned to Mexico and independent ball. He played 1994 and part of 1995 at Veracruz, then arrived at independent Amarillo later in 1995.

Maclin then stayed with Amarillo through 2001, becoming a fan-favorite and perennial all-star. He served as a player-manager his final year there. He then ended his playing career in 2003 with independent Jackson.