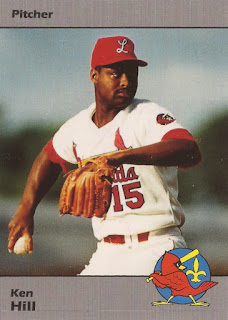 "We are obtaining a solid, accomplished major league starter," Duquette told reporters after the deal. "Hill is an emerging talent who ranked with the best in baseball as one of the toughest pitchers to hit last year."

Hill soon showed what that emerging talent could do. After going 11-10 for the Cardinals in 1991, he went 16-9 for Montreal in 1992. He then went 16-5 in the strike-shortened 1994, leading the Expos to the best record in baseball and himself to second place in the Cy Young voting.

By the time his career finished, Hill had seen 14 major league seasons, started 315 major league games and turned in a career 117-109 record.

Hill's career began in 1985, signed by the Tigers as an amateur free agent out of Massachusetts College of Liberal Arts.

Hill started with the Tigers at single-A Gastonia, then played 1986 between Gastonia AA Glens Falls. He then arrived with the Cardinals in a mid-season trade. He played parts of the next two seasons at AA Arkansas.

Then, in September 1988, he made the jump to St. Louis. He got into four games, started one and gave up eight earned runs in 14 innings of work.

"The key," Hill told The New York Times afterward, "was throwing two pitches for strikes, the fastball and forkball. It gives them something to keep in the back of their minds."

Hill then played 1991 again with the Cardinals before moving to the Expos. Starting his 1994 campaign, Hill spoke to The South Florida Sun-Sentinel about his goals as a pitcher.

"Whether as No.1 starter or a No.5 starter, I just wanted to show I'm capable and able to pitch in the big leagues," Hill told The Sun-Sentinel. "I just don't want to be known as [a bad) pitcher. One day, I don't want to walk down the street and hear somebody say, 'Hey, that's Ken Hill. He was [expletive).' I want to walk down the street, `Hey, he was a good pitcher.'"

Hill showed he was capable enough that year to earn his first All-Star birth. He returned to the Cardinals to start 1995 as the Expos dismantled. He also played with the Indians, helping them to the World Series.

Hill continued playing in the majors each year through 2001. He went 9-6 for Anaheim in 1999, coming back from bone chip surgery the previous year.