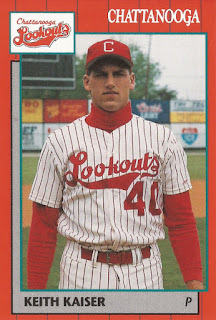 Keith Kaiser recounted his pro baseball career to The San Antonio Express-News in 2010. Kaiser played six seasons, made it to AA and even got a brief call to the bigs, though he didn't get to play.

"Playing pro ball was still a neat experience," Kaiser told The Express-News. "I wouldn't change it for the world. I loved that life. Now, I feel like I have lived two lives and both of them have been great."

Kaiser's second life turned out to be in a second sport: Football. Kaiser spoke to The Express-News as the new football coach at San Antonio's Marshall High School - after playing football in college.

Kasier's baseball career began in 1986, signed by the Reds out of New Mexico State University. The Reds selected him in the 21st round of the previous year's draft.

Kaiser played football for one year at New Mexico State before signing with the Reds.

A few years after his stint playing quarterback at New Mexico State, he got to meet his idol, former Bengals quarterback Ken Anderson, who interviewed him for a TV segment. "I used to watch him play on TV," Kaiser told The Cincinnati Enquirer.

Kaiser then moved to the Astros in a trade with two others for Bill Doran. He played 1991. He played that year between high-A Osceola and AA Jackson. He went 1-9 overall in 21 games, 16 starts. He turned in a 10.99 ERA, ending his career.