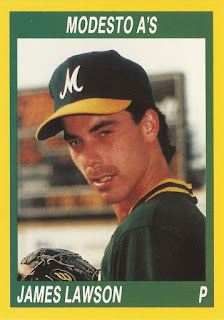 Former professional player Jim Lawson was in his third year conducting a baseball clinic in a town east of Calgary in 2007 and he could see improvement, he told The Strathmore Standard that January.

"What you see is their fundamentals, their baseball mechanics, (are better)," Lawson told The Standard. He added, "These kids have a foundation and now we can build on it."

Lawson headed that clinic having had two decades of experience in the game, both as a player and as a coach. Lawson played professionally for three seasons, then returned home to his native Canada and became a coach and instructor.

Lawson's career in baseball began in 1988, taken by the Athletics in the 12th round of the draft, out of Huntington University in Indiana. Lawson went to Huntington having grown up in British Columbia.

With the Athletics, Lawson started with the short-season Southern Oregon A's. In 24 outings, six starts, he posted a 3.40 ERA. He went five-plus in relief in the season finale, giving up one run.

For 1990, Lawson played at high-A Modesto, getting some time back at Madison. Between them, he got 30 outings, two starts. His ERA came in at 7.31. It was his final year as a pro.

His playing days over, Lawson returned to Canada and became a coach in various capacities. From 1994 to 1999, he served as head coach for a senior men's team. From 2000-2001, he was head coach at the University of Calgary, starting that program.

Since 2001, he has been head coach and instructor for the Calgary Pro Baseball Force Redbirds, a baseball academy he founded.

In 2007, he took a team of senior Redbirds to the national tournament, but they didn't have the results they hoped to have.

"We've all played at a high level," Lawson told The Calgary Herald. "We just want to play the best calibre of baseball until we can't play anymore."