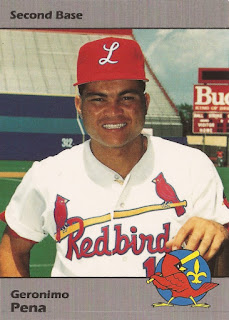 The Cardinals had a youth movement going on in August 1991 and one of the players mentioned as part of that movement was Geronimo Pena.

Pena was in his second season with the Cardinals and he would stay with the team for parts of a total of six seasons, playing second base and bringing some power and speed off the bench.

Pena's professional career in 1984, signed by the Cardinals as a free agent out of his native Dominican Republic. He hit the minors two years later, playing at rookie-league Johnson City. He made it to AA Arkansas in 1989 and AAA Louisville and then St. Louis in 1990.

In 1987, Pena was credited with a total of 80 stolen bases with single-A Savannah. In 1988, Pena had three hits, an RBI double and two stolen bases in a July game.

Called up to St. Louis in September 1990, Pena got into 18 games, posting a .244 batting average. Along the way, he batted in the only run in one game with a first-inning sacrifice fly against the Phillies.

But he did well enough to be invited back, playing in a total of 104 games for the Cardinals in 1991, stealing 15 and hitting .243. Another Pena sacrifice fly, this one in the ninth inning of a June game, won it for St. Louis. He'd entered the game as a pinch runner the inning before. In another game that month, he had a homer and an RBI double in a 5-2 win against the Reds.

In August, Pena entered one game as a pinch-runner, stole second and scored the tying run. He then hit what was almost the game-winning home run in the 11th, but for a Barry Bonds home run in the bottom of the frame.

And Pena got off to a hot start. But that was after he was benched for not playing hard enough, according to the Seattle Times. Pena ended up responding by opening the season and getting on base each of his first eight times at the plate.

His average returned to .256 in 1993 and by early 1994 Pena tried an experiment he soon abandoned. He had been a switch-hitter, but he tried hitting from the right side only, according to the Chicago Tribune. But that was dropped at the start of the year.

In 1995, Pena only played in 32 games for the Cardinals. He missed much of May after breaking his shinbone. But he came back May 29 and provided the game-winning single in the 11th against the Rockies. Pena would bruise his thigh days later.

His final year was in 1996. He spent the first part at AAA Louisville before being released in July. He then signed with the Indians, where he would play his final five major league games, going 1 for 9.