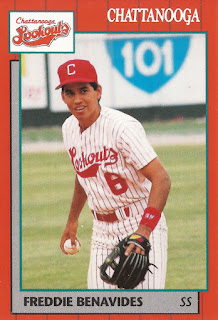 Freddie Benavides hoped to make AAA Nashville out of spring 1990, according to The Nashville Tennessean, but the lockout that year limited his time and he instead started back at AA Chattanooga.

Benavides, though, went right to work, The Tennessean wrote.

"I didn't complain about going to Chattanooga. That would have done no good," Benavides told The Tennessean after advancing to Nashville later that year. "I went there, had some at-bats, had pretty good numbers and they called me up."

Benavides went on to advance to the majors in 1991 and see time there over four seasons. He then later became a coach and a manager, ultimately returning to the majors as a coach for the Reds.

He continues with the Reds in 2017, helping decide if runners should advance as first base coach.

Benavides' career began in 1987, taken by the Reds in the second round of the draft out of Texas Christian University.

He started with the Reds at single-A Cedar Rapids. He returned there in 1988 and then hit AA Chattanooga and AAA Nashville in 1989. He returned to both levels for 1990, then made Cincinnati in 1991.

Benavides then moved to the Rockies in the expansion draft. He hit .286 over 74 games. That September, he made a bid for the club's first inside-the-park home run. He came two steps shy.

"I ran out of gas," Benavides told The Colorado Springs Gazette Telegraph afterward. "I was hoping for a bad throw."

Benavides rounded out his big league career with 47 games in 1994 with the Expos.

He started his coaching career by 1999, serving as manager of single-A Clinton. He moved to minor league infield coordinator with the Reds in 2001. He stayed with the Reds. In 2014, he served as infield coach. In 2016, he became Reds first base coach.

As a coordinator, Benavides helped in the development of Joey Votto, according to The Cincinnati Enquirer.