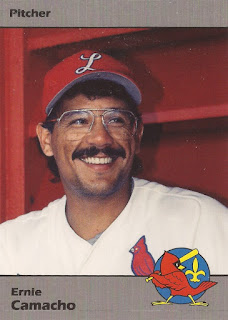 Ernie Camacho went down with injury early in his 1985 season, but he soon grew frustrated as an early surgery didn't work.

It took a second surgery that October, and a season of uncertainty, for the Cleveland Indians single-season saves leader to finally get back on track, according to The Detroit Free Press.

"I could pitch with pain, but not with injury," Camacho told The Free Press. "Nobody wanted to believe me. The brass didn't believe me. My teammates turned against me. I guess I can see why. Until then, who were they to believe? A doctor with 20 years' experience or me?"

Already a veteran of parts of five major league seasons, Camacho returned from that injury to play in five more. The reliever got into 193 games in all over his decade in the majors and saved 45 games.

Camacho's career began in 1976, taken by the Athletics in the first round of the June secondary draft out of Hartnell College in Salinas, Ca.

Camacho got into five games for the Athletics in 1980. He gave up nine earned in 11.2 innings. He then moved to the Pirates in a trade for 1981 and got into another seven major league games. This time, he gave up 12 earned 21.2 innings.

After going through the White Sox and Brewers systems, he landed with the Indians in mid-1983 and returned to the bigs. He then broke out in 1984 to appear in 69 games, post a 2.43 ERA and save a team-record 23.

He then returned for 1985, but went down injured after only two appearances. Back with the team for spring 1986, Camacho expressed his thankfulness for being back.

"It felt nice to be out there after a whole year without facing a batter," Camacho told reporters after an early spring outing. "I got ground balls, and my velocity is next to come. I'm not throwing 90 miles per hour yet, but that's because my shoulder is a little stiff. But nothing is really hurting."

Camacho returned to his 1984 form that year. He got into 51 games and saved 20. (He also escaped a mid-season boating incident and near-disaster with teammates.)

Camacho continued in the majors each year through 1990, though saw a maximum of 15 games in any one season. He went through the Indians, Astros, Giants and Cardinals in that time frame.

He ended with the Cardinals in 1990, getting into six games in St. Louis and also seeing time at AAA Louisville to end his career.