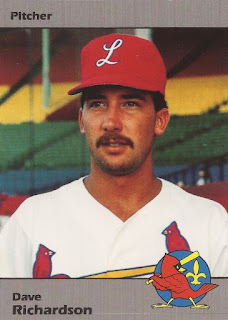 He did it after an early tournament injury put his championship game start in doubt, according to The Tennessean.

"Everybody thought Richardson was hurt," Middle Tennessee coach Steve Peterson told The Tennessean, "but he'd been trying to get back in the game since Saturday at 6 a.m., when we took batting practice. He's just a hard-nosed kid."

Richardson took that approach from college to the pros. He couldn't take it to the majors. He played five seasons and made it up to AAA.

Richardson's career began  that year in 1988, taken by the Cardinals in the 17th round of the draft out of Middle Tennessee State.

At Middle Tennessee, Richardson followed up his conference title win with a six-hit effort in the regionals against the top seed Texas A&M for a 3-1 win.

"We simply gave some runs away early and you can't do that against a guy like Richardson," A&M coach Mark Johnson told The Associated Press after the regional win. "Give him credit, he had our people off stride and changed speeds very well."

Richardson made the Middle Tennessee Hall of Fame in 2010. He remained first in career wins at the school with 29 and complete games, with 23. He also still ranked fourth in strikeouts.

Richardson started with the Cardinals at short-season Hamilton. He went 5-9 over 17 outings, 13 starts. He then moved to single-A Springfield for 1989 where he turned reliever. In 51 outings, he turned in a 2.62 ERA.

He played 1990 largely at high-A St. Petersburg, but also jumped up to AAA Louisville for five relief outings.