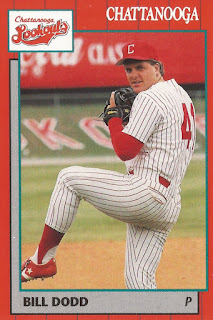 Bill Dodd assessed his season at AA Chattanooga in June 1989, according to The Los Angeles Times.

The pitcher and former California high school star spoke to The Times after a rare good outing.

"So far, it hasn't been a good season," Dodd told The Times. "It's fun when you're doing well and the team's doing well. When everything is going right, there's nothing better than playing baseball."

Dodd played his first season at AA that year, his fourth as a pro. He returned to Chattanooga in two more seasons, but he never played well enough to make the bigs.

Dodd's career began in 1986, taken by the Reds in the second round of the January draft out of Saddleback College in California.

Dodd won local player of the year honors in his junior year of high school. He then worked on developing multiple pitches, he told The Times in 1984.

"I do have a curveball and a changeup." Dodd told The Times that February, "but now I'm working on a 'cut fastball."

Dodd chose Arizona State out of high school, but arm problems and a disagreement with his pitching coach led him to Saddleback.

With the Reds, Dodd started at rookie Billings. He spent his first two seasons there. He went 5-1 both years, mostly in relief, and posted ERAs around 4.

He moved to single-A Cedar Rapids in 1988. He had a hand in a three-hitter in a May game. He then made the league All-Star team. He posted a 2.07 ERA overall, earning 10 saves.