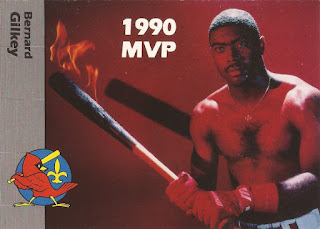 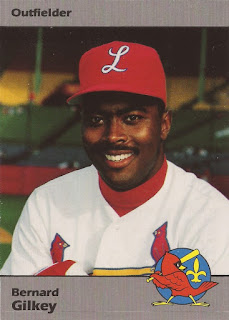 Bernard Gilkey had refused a trade from the Diamondbacks to the Pirates and talk was Arizona Manager Buck Showalter would give Gilkey reduced playing time as a result, The Beaver County Times wrote in February 1999.

Gilkey wasn't concerned. Things were fine between him and his manager, he told The Times.

"The best manager I ever had is the one who puts my name in the lineup," Gilkey told The Times, "and that's my goal here, to make this club."

Gilkey was going into his 10th major league season in 1999, having debuted with the Cardinals in September 1990. His career continued into 2001, ending as his Braves lost to his old team in the National League Championship Series.

Gilkey's professional career began in 1984, signed by the Cardinals as a teenage free agent out of high school outside St. Louis. He played 1985 at short-season Erie. He didn't make AA until 1989 at Arkansas. He made AAA Louisville and then St. Louis in 1990.

Gilkey played 18 games with the Cardinals in 1990, returning for another 81 in 1991. He hit just .216 with five home runs in his second campaign. One of those home runs came in a May contest.

Gilkey was a regular in the lineup in 1992, playing in 131 games, hitting seven home runs. He also picked up his average to .302. He won a September game against the Expos with a 10th-inning home run off John Wetteland.

"He was bringing it hard," Gilkey told The Associated Press of Wetteland. "It feels good to help out, especially when you win the game."

In 1993, Gilkey hit 16 home runs with a .305 average. Cardinals Manager Joe Torre began to use Gilkey in different hitting roles. In a July game, Toree put Gilkey in the cleanup role. Gilkey responded by hitting a three-run home run.

"It's nice to know Joe Torre feels good enough about me to put me in different spots in the lineup," Gilkey told The Associated Press. "It really doesn't matter where I hit."

Gilkey stayed with the Cardinals, his hometown team, through 1995. Traded to the Mets for 1996, Gilkey promptly had a career year. He hit .317 with 30 home runs.

At the trading deadline, the Mets sent Gilkey to the Diamondbacks. He made Arizona again in 1999, playing in 94 games after that rejected trade to the Pirates. He also hit .294 with eight home runs.

Gilkey was finally moved the next season, the Diamondbacks released him. He soon signed with the Red Sox. In his first game with Boston, Gilkey had three hits, helping the Red Sox to a 14-4 win.

Gilkey signed with the Braves in April 2001. He hit .274 in 69 games for the Braves. His career ended in October, with Gilkey going 1 for 11 in Atlanta's loss in the NLCS to the Diamondbacks.