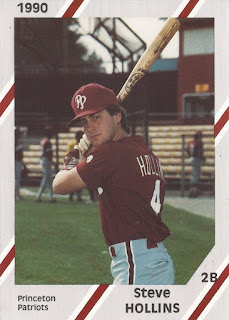 Dave Hollins debuted for the Phillies in April 1990, starting a 12-season major league career that included an All-Star nod for Philadelphia.

Two months after that Hollins' major league debut, the Phillies added another Hollins to their organization, Hollins' brother Steve Hollins, according to The Philadelphia Inquirer.

Steve Hollins' professional career, however, ended up being brief. He played a single season as a pro.

At Appalachian State, Hollins won all-conference honors in 1989. He walked 43 times that year, still fifth all-time at the school. He hit a home run in an April win.

He played the summer of 1989 back home in Buffalo in muny ball. He scored four runs in a July game and picked up three hits in an August contest.