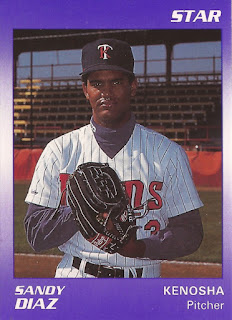 Sandy Diaz fielded the ball in this August 1989 game for Elizabethton, but he didn't record the out. He also allowed a run to score, according to The Bluefield Daily Telegraph.

Pitching in the sixth inning, the reliever Diaz grabbed the come-backer and threw to first. The ball, though, sailed wide for an error and a run. He then soon gave up another run on a single, The Daily Telegraph wrote.

It was a game Elizabethton would go on to lose in extras, according to The Daily Telegraph.

Diaz pitched in that game in his first season as a pro. He went on to play in four seasons. He never made AA.

Diaz' career began that year in 1989, signed by the Twins as a free agent out of his native Dominican Republic.

Diaz played that first year in the rookie Appalachian League. He got into 12 games, starting seven. He had a 5-3 record, with a 5.37 ERA.