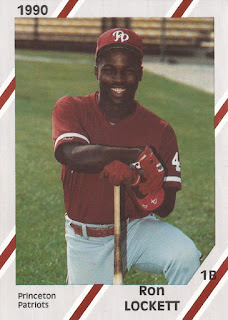 A minor injury delayed the start of Ron Lockett's 1993 season, but he quickly made up for lost time, according to The Reading Eagle.

In his first start of the season, Lockett slammed two home runs and knocked in five runs. The second shot was a no-doubter, The Eagle wrote. The first wasn't.

"I thought the first one was just a double or a triple," Lockett told The Eagle afterward. "I didn't stop running till I heard the people yelling and clapping. I didn't know what was going on."

Lockett may have moved into his home run trot that night after hearing the cheers, but he didn't stop running in his career for six more seasons. In all, Lockett played a decade as a pro. He made it as high as AAA, but he never got to make the majors.

Lockett's career began in 1990, taken by the Phillies in the eighth round of the draft out of Jackson State University.

Lockett started with the Phillies at rookie Princeton. The first baseman got into 63 games and hit .310. He also hit six home runs and stole 11 bases.

Lockett returned to Reading for 1993. He hit .242 that year, with 11 home runs. In an April game, he knocked a game-winning, bases-loaded double against London. Not long after, Lockett picked up three hits, four RBI and a home run in a televised game against Harrisburg.

Lockett then moved up to AAA Scranton for 1994. Early on, Lockett knocked a home run and an RBI double in a game to start the year strong.

In 90 games overall there, Lockett ended up hitting .228, with five home runs. One home run came on the final home game of the season, a ninth-inning shot to tie the game. It was his final season in affiliated ball.

Lockett continued his career in 1995 in independent ball with the Albany Diamond Dogs in the Northeast League. He hit .282 over 54 games that first year at Albany.

The next year, Lockett served as team captain and hit .314, helping power his team to the league title. He went 3 for 5 in the title-clinching game, with a home run.

"I knew if I got us started, I think guys would follow behind me," Lockett told The Schenectady Daily Gazette afterward. "I feel like a hundred pounds lighter."