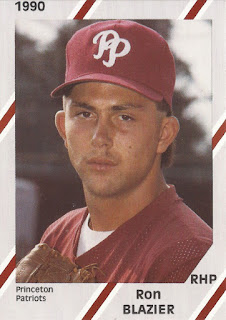 Taking a break from his off-season workout in January 1995, minor leaguer Ron Blazier spoke to his hometown Altoona Mirror about his progress and his expectations.

A veteran of five seasons, Blazier had yet to see AA. To The Mirror, though, he looked forward to the ultimate goal, the majors.

Blazier ultimately did majors. And he did it ahead of his self-ascribed schedule. Blazier debuted in Philadelphia just over a year later, in May 1996. The reliever saw time in two big league seasons, both with the Phillies. He got into 63 major league games in all.

Blazier started his career in 1990, signed by the Phillies as an undrafted free agent out of Bellwood High School in Pennsylvania.

Blazier started with the Phillies at rookie Princeton. He moved to short-season Batavia for 1991 and single-A Spartanburg in 1992. At Spartanburg, he went 14-7, used mostly as a starter. He also turned in a 2.65 ERA.

Blazier picked up his first major league win in June, striking out two in an inning of work.

"It's nice to finally get this," Blazier told The Allentown Morning Call afterward. "I really can't put it into words. I had a few chances when I first came up, but they didn't pan out."

He picked up his second win in early July, helping to seal a victory with a 2.2-inning performance where he gave up two hits, but no runs.