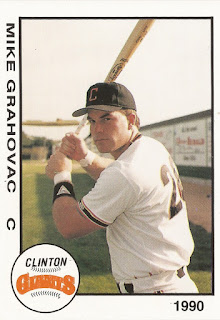 Former Concordia University first baseman Aaron Gates signed with the Yankees in 2013 and his old coach Mike Grahovac told The Orange County Register that July he looked forward to watching Gates move up.

"I am very happy for Aaron Gates to get a chance to play professional baseball," Grahovac told The Register. "He deserves it."

Years earlier, Grahovac had his own chance to play professional baseball. He played three seasons before an injury ended his career.

He then went on to a career as a coach and even as a police officer. In 2011, Grahovac led Concordia to the NAIA national championship.

Grahovac's pro career began in 1989, taken by the Giants in the fourth round of the draft out of Chapman University in California. He also played at Azusa Pacific.

Grahovac started with the Giants at short-season Everett. The catcher hit .168 in 46 games as he adjusted to using wooden bats.

Grahovac then soon started his coaching career. He returned to Chapman for a year, then spent seven years coaching at Orange Coast College before turning to a long stint in law enforcement, according to CourtesyRunner.com.

He returned to coaching at Orange Lutheran High School, where he coached another future professional player - and future major league player - Garrit Cole.

"I coached him three years, and he's probably the most competitive kid I've ever been around," Grahovac told The Los Angeles Times in 2013 of Cole. "On and off the field, he was very competitive."

Grahovac took over at Concordia in 2009 and continued there through 2015. In 2016, he managed the Anchorage Bucs in the Alaska Baseball League, where he made headlines for a brawl between Grahovac and the opposing coach.

In 2011, Grahovac made better headlines, as Concordia took the national championship.