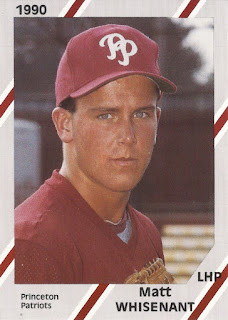 Matt Whisenant appeared on the cusp of a major league breakthrough in spring 1997, according to The South Florida Sun-Sentinel.

Playing with the Marlins, the 26-year-old lefthander posted a good off-season and continued that into the spring. But he also had a comparatively wild previous year at AAA, The Sun-Sentinel wrote.

"I know the Marlins look at my track record and wonder if (my stuff) is going to hold up for a whole season," Whisenant told The Sun-Sentinel. "I understand that. But personally, I know what I feel inside, and I feel like a different person now. Mentally, I feel like I've gotten over the hump."

Whisenant did make the Marlins that year and the Royals later after a trade. He went on to use his stuff in four major league seasons, part of a professional career that spanned 12 campaigns. In two of his big league seasons, the reliever saw at least 67 appearances.

Whisenant's career began in 1990, taken by the Phillies in the 18th round of the draft out of Glendale Community College and La Canada High School in California.

He started with the Phillies at rookie Princeton. He moved to short-season Batavia in 1991 and single-A Spartanburg in 1992.

Whisenant appeared to be on his way at Spartanburg. The Los Angeles Times noted some pegged him as the best arm in the organization.

"I've really matured the past couple years--on the mound and off," Whisenant told The Times in August 1992. "I'm progressing every time I go out there. Hopefully, that will continue through Instructional League and spring training. As long as I stay healthy and consistent, I'm confident I'll keep moving up."

Whisenant kept moving up, but did so with the Marlins, sent there in a November 1992 trade. He arrived at AA Portland in 1995 and AAA Charlotte in 1996. He largely spent those early years as a starter. But, as he prepared to make the bigs in 1997, he turned reliever.

Whisenant got into four games for the Marlins in early 1997. He then landed with the Royals in a July trade. Kansas City then put him to work in 24 outings down the stretch. He posted a 2.84 ERA.

He returned to the Royals as a regular in 1998. He got into a total of 70 games in relief that year, ending with a 4.90 mark. That July, Whisenant worked out of a bases-loaded, one-out, ninth-inning jam to send a game to extras.

"Considering I created the jam, I'm glad I got out of it," Whisenant told The Associated Press after the win.

Whisenant got into 67 more games in 1999, working the second half of the year with the Padres. He pitched in 24 more games for the Padres in 2000, marking the end of his major league career.

Whisenant has since gone into high school coaching. In 2016, he returned to his old school La Canada.

"I think when you have the opportunity to bring someone like Matt back home, you jump at the chance," La Cañada Principal Ian McFeat told The La Canada Valley Sun upon Whisenant's return. "We're ecstatic because Matt is a man of integrity and deeply cares about baseball and loves baseball. I can't wait."
1990 Minor League Tally
Players/Coaches Featured: 2,676
Made the Majors:1,030-38.5%-X
Never Made Majors:1,646-61.5%
5+ Seasons in the Majors: 426
10+ Seasons in the Minors:262
Posted by Steve78 at 9:00 PM