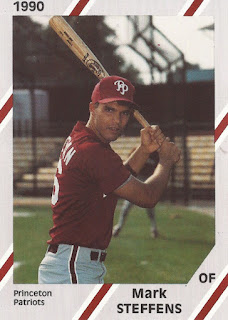 Mark Steffens decided in favor of college two years before. So, when the Phillies came calling again in 1990, albeit as a free agent signing rather than in the draft, Steffens expressed excitement, according to The Doylestown Ingelligencer.

"I like to be around my family a lot. I'm a family oriented person," Steffens told The Intelligencer. "And I think it's great to go to the local team."

Steffens signed with the Phillies and started his pro career that year. He went on to play in three seasons. He never saw Philadelphia.

Steffens began his career that year, signed by the Phillies out of Pensacola Junior College. He went there out of Germantown Academy in Fort Washington, Pa. The Phillies originally took him in the 23rd round of the 1988 draft, but he didn't sign.

At Germantown, Steffens won first-team all-conference all four years and won Player of the Year honors his final two, according to the school.