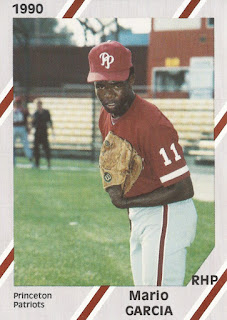 Mario Garcia both looked at the present in 1991 and his hoped for future in a quote included on his baseball cards that year.

"I feel good to be able to play in a great city," Garcia said, according to his card. "My goal is to make the show and become a great pitcher."

Garcia's 1991 present saw him playing in his second year as a pro, in rookie ball at Huntington with the Cubs. His future, however, included just one more season. His future never included the show.

Garcia's career began in 1990, signing a pro contract out of his native Dominican Republic. He later played in the Cubs organization, though it is unclear who he signed with originally.