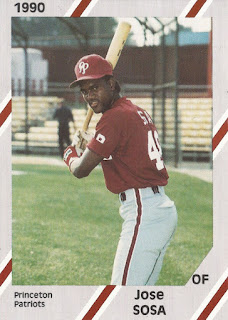 Jose Sosa came to the United States in 1990 likely hoping for a long pro career, or at least one where he had a chance to show what he could do.

Instead, the Dominican native had few opportunities to show his skills. The outfielder saw time in a single season, 14 total games, marking the extent of his pro career.

Sosa's career began and ended that year in 1990, signed to a professional contract and assigned to co-op Princeton of the rookie Appalachian League. He is listed as residing in San Pedro de Macoris, Dominican Republic, east of the capital of Santo Domingo.

The team that held his rights is unclear. Phillies signees predominantly filled the Princeton roster, however, the Tigers and Braves also added players to the team.

With the Patriots, Sosa got into those 14 games. He picked up five hits in 32 at bats, for a .156 overall average. He hit one double, knocked in three runners, walked twice and struck out 18 times.

Those numbers are largely all that is recorded of Sosa's pro career.