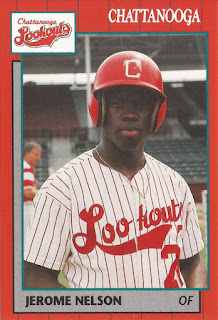 Jerome Nelson subbed for hotter-hitting teammate Skeeter Barnes in this August 1990 game and Nelson showed himself well, according to The Nashville Tennessean.

Though he ended his 51-game stint at AAA Nashville with a .220 average, he went 2 for 4 this night, hit a triple and had a key sacrifice bunt, The Tennessean wrote.

"I knew that with Skeeter out we were losing about a hundred points in batting average, but I wanted to do my part," Nelson told The Tennessean afterward.

Nelson made it to AAA for the first time that year, in his sixth season as a pro. He went on to play in two more, but he never made the majors.

Nelson's career began in 1985, taken by the Angels in the third round of the draft out of Pine Forest High School in Florida.

Nelson started with the Angels at short-season Salem. He hit .270 in 69 games. He went 3 for 5 in an August game. The Angels then traded Nelson to the Athletics with another player for future Hall of Famer Don Sutton.

Nelson played 1986 and 1987 at single-A Modesto. He stole 51 bases there his second year. To open the 1986 season, Modesto GM Dan Kiser assessed Nelson and another player. "Both are good prospects," Kiser told The Los Angeles Times.

Nelson arrived with the Reds for 1989 at AA Chattanooga. He returned to Chattanooga to start 1990 and made the Southern League All-Star Team. He then moved up to Nashville.