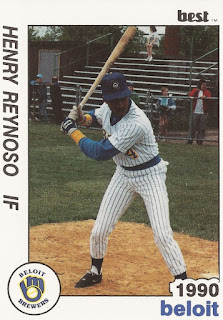 His Beloit Brewers already on the board in this August 1990 game, Henry Reynoso kept the scoring going.

With one in and a runner on second, Reynoso knocked a single to plate the runner to stretch the early score to 2-0.

Reynoso went 2 for 4 overall in that game, with that one RBI. That game, however, turned out to be one of his last as a pro. Reynoso played two seasons, making it as high as single-A.

Reynoso's career began in 1989, signed by the Brewers as an undrafted free agent the previous year out of his native Dominican Republic. He attended Liseo Ansonia in the Dominican.

Reynoso played his first season with the Brewers between three teams, the rookie Arizona League and Pioneer League, and single-A Beloit. In 58 games between the three levels, Reynoso hit .284, with 21 RBI and 29 stolen bases.