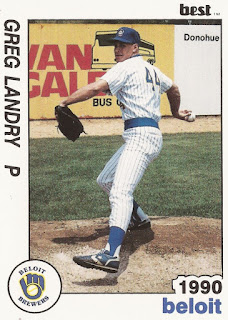 "The best arm I saw," Gassaway told Knight-Ridder in June 1988. "Problem with the boy is he don't throw strikes. But if he ever learns, watch out."

Landry signed that year with the Brewers, starting his pro career. Landry, however, never found the control needed to advance. Landry played four seasons, making it to high-A.

Landry's career began in 1988, taken by the Brewers in the sixth round of the draft out of the University of Texas at Austin.