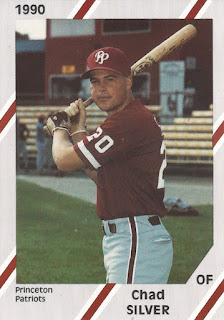 Playing for Athletes in Action on a Moscow trip in 1989, Chad Silver met and befriended a young Soviet player named Andre Tselikovsky, according to Scripps Howard News Service.

Tselikovsky had big baseball dreams and Silver helped him at least pursue them. Silver helped make a trip to the United States and Silver's Carson-Newman College team possible, the news service wrote.

"Everybody likes him," Silver told Scripps Howard of Tselikovsky. "It's a wonderful adventure. I can't believe I'm involved in such an experience. (Andre) is the most highly motivated person I've ever met. I enjoy baseball a lot, but he's really hooked."

While Tselikovsky never realized his dream of playing in the pros, Silver did realize his, though briefly. Silver went on from Carson-Newman to play in the Phillies system. His career consisted of a single season.

Silver's career began and ended in 1990, taken by the Phillies in the 42nd round of the draft out of Carson-Newman in Tennessee. Silver is also credited as Chadwick Silvers.

At Carson-Newman, Silver hit a two-run double in an April 1987 game. He later won second-team all-conference honors in 1990.

Carson-Newman's baseball complex, the Silver Diamond Baseball Complex, is named for Silver's parents, whose donations helped build it. On the dedication day in May 1990, Silver hit a home run, according to the school.