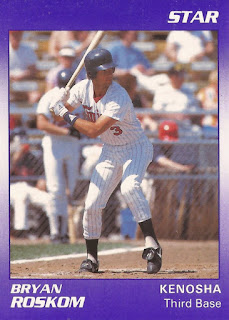 Bryan Roskom made multiple on the baseball field, just not so many in his career.

On the field, Roskom played at nearly every position on the diamond, even pitcher. The only position he never played at: Center.

In his career, Roskom played three seasons, all in the Twins system. He hardly moved around there. He played all or part of his three seasons with Kenosha, in his home state of Wisconsin. He never made AA.

Roskom's career began in 1987, taken by the Twins in the 42nd round of the draft out of Appleton High School in Wisconsin.

Roskom has since returned home to Appleton. He's helped out at Lawrence University and served as an instructor. He's also continued to play, serving with the semi-pro Appleton Legends, getting a hit and scoring in a 2004 game.
Posted by Steve78 at 1:09 PM