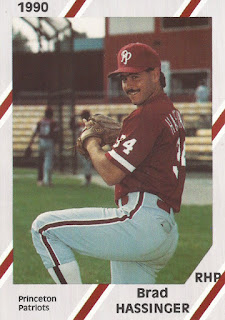 Hassinger played five seasons as a pro, for six different minor league teams. He made AA. He didn't make the majors.

"The minors are a tough life, but a great life," Hassinger told The Daily Item. "I've done something that a lot of people will not do. I got to play winter ball in Hawaii, play in the minors for a few years. It was an awesome experience."

Hassinger took the occasion to reminisce on his induction into his local Elizabethtown College athletics hall of fame in 2009.

Hassinger's career in baseball began in 1990, signed by the Phillies as an undrafted free agent out of Elizabethtown College in Pennsylvania.

At Elizabethtown, he won 21 games, struck out 217 and completed 15 contests, all among the top 10 in their categories at the time of his hall induction.

He played June 1988 in a summer league game with Quakertown. In one game, he threw a complete game and struck out nine, according to The Allentown Morning Call.

"I had close to 100 strikeouts this year, so I guess I'm a power pitcher," Hassinger told The Morning Call afterward. "But I don't try for strikeouts - I just go out there to throw strikes."

Hassinger started with the Phillies in 1990 at rookie Princeton. He got into 13 games, going 7-4, with a 2.18 ERA. That September, he pitched at Veterans Stadium in Philadelphia, at a "young-timer's game."

He then started 1993 at AA Reading, but quickly moved to the Braves in a trade for former Cy Young winner Mark Davis. Hassinger played the rest of that year at AA Greenville and high-A Durham. Overall, he went 7-2, with a 2.11 ERA.