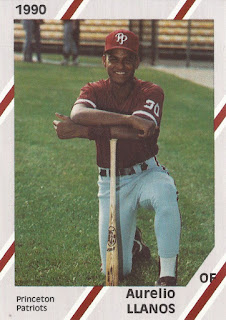 "You have to get those guys with the changeup," Bargman told The Herald. "They come up swinging and the way to get them is to keep them off balance."

Bargman kept Llanos off balance in this game, but Llanos hit well enough that year to record a .330 average. He recorded that average for independent Bayou in his ninth professional season. He also recorded it in his last pro campaign.

Llanos played six of his nine seasons in affiliated ball, for the Phillies, Mariners and Blue Jays organizations. He made it as high as single-A.

Llanos' pro career began in 1988, signed by the Phillies as a free agent out of his native Puerto Rico. Llanos is also credited by his given name, Aurelio Llanos.

Llanos started with the Phillies at rookie Martinsville. He got into 19 games there his first year and 33 upon his return there in 1989. He missed hitting .200 both years.

Llanos then isn't credited as playing in 1991. He returned to the field in 1992 with the Mariners at short-season Bellingham. He moved single-A Appleton in 1993, hitting .252 and ending his two-season stint in the Seattle organization.

His last stint in affiliated ball came in 1995 with the Blue Jays at single-A Hagerstown. He hit .251, with 17 home runs and 63 RBI. He won batter of the week honors that May, hitting .529 over five games, with two home runs.