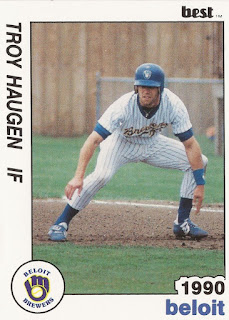 Named head coach at Greenhill School outside Dallas in 2016, Troy Haugen knew the work needed to get his team to the playoffs, he told the school's student newspaper, The Evergreen.

That's because he'd regularly taken teams at his previous schools there, The Evergreen wrote.

"There's a lot that goes into it," Haugen told The Evergreen. "No. 1, is showing the commitment to the kids, making sure they understand how committed you are as a coaching staff and that we're all in this together."

Haugen turned to coaching after a brief career as a player in the pros. Haugen played three seasons in the Brewers system, making it to high-A Stockton, but no higher.

Haugen's pro career began in 1989, signed by the Brewers as an undrafted free agent out of Oregon State University.

He started with the Brewers at short-season Helena. He got into 57 games and hit .265. He scored in an August game on a single.