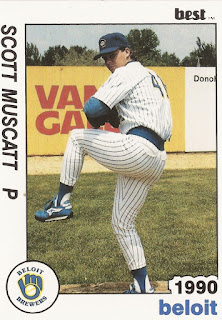 Scott Muscat's St. Thomas Aquinas baseball team made it within one win of the Division II championship game in 2017 - all after a slow start, Muscat noted to NCAA.com.

"Then we went on a 28-4 run," Muscat told the site, "and the confidence of the team, and some new guys that stepped up there was a lot of confidence there."

Muscat took his team to those heights in his long career as the team's head coach. He previously played himself, in the Brewers organization. He played two seasons, making it as high as single-A.

Muscat's professional career began in 1989, taken by the Brewers in the 18th round of the draft out of the University of North Carolina at Charlotte. Muscat's name has also been spelled Scott Muscatt.

Muscat started with the Brewers at rookie Helena. He got into 18 games, started two. He picked up three wins, one save and a 4.02 ERA.

On the team's 2017 tournament run, St. Thomas Aquinas defeated UC San Diego in extras in the first round. Muscat told NCAA.com about his team's approach.