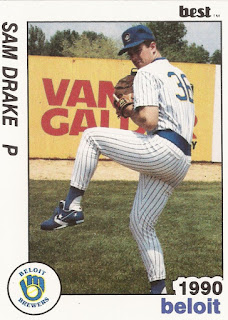 Sam Drake took part in a bit of international diplomacy this day in April 1989, and he did so without giving up a hit.

Drake pitched for Georgia Tech against the Soviet National Team, a country with limited experience in the game. Drake and two other Georgia Tech pitchers no-hit the Soviets over a 13-1 shortened seven-inning win.

Drake went on from Georgia Tech to turn pro. His pro career lasted three seasons. He made it to high-A Stockton.

Drake's career began in 1989, taken by the Brewers in the 24th round of the draft out of Georgia Tech.

At Georgia Tech, Drake went seven innings in a March 1988 game, giving up four hits in a 9-3 win.

He won freshman All-America honors in 1987, winning 11 games that year. He won 22 games and struckout 256 over his time at the school.

Drake played his first year with the Brewers between single-A Beloit and rookie Helena. In nine outings, he went 3-1, with a 3.98 ERA.