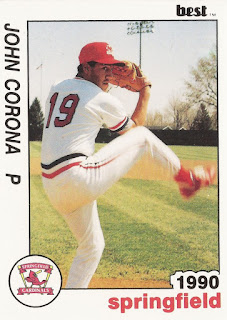 John Corona seemed enough to push his high school team to the top of the league in 1987, according to The Los Angeles Times.

Pitching for Santa Fe High in California, The Times wrote Corona anchored the pitching staff as a lefty going into that season.

"His presence," The Times wrote of Corona, "has a majority of the league's coaches predicting that Santa Fe will finish in the top three."

Corona went on to make his presence known at Cerritos College and in the pros. His presence in the pros lasted seven total seasons. He made AAA, but didn't make the majors.

Corona's career began in 1989, taken by the Cardinals in the 39th round of the draft out of Cerritos.

Corona started with the Cardinals in the rookie Arizona League. He appeared in 28 games, second in the league. He went 10.2 innings over six outings without giving up an earned run and saved five games.

Corona then divided time between high-A St. Petersburg, AA Arkansas and AAA Louisville in 1991. He gave up a two-run home run in a June game for Louisville. He pitched a scoreless ninth in an August win for Arkansas. Overall, he posted a 4.25 ERA on the year.