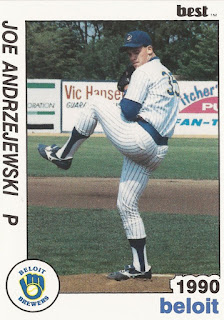 Joe Andrzejewski assessed his performances to The Baltimore Sun in August 1991.

In a word, those performances were erratic, he told The Sun.

"Some days, I go out there and pitch great," Andrzejewski told The Sun. "Other days, I go up there and I'll constantly be behind the hitters, and they won't really hit me hard. I'll just walk a lot of people. I commit suicide out there."

Andrzejewski pitched that year, his fourth year as a pro, with short-season Erie. That season also proved to be his last. Andrzejewski made it as high as single-A.

Andrzejewski's career began in 1988, taken by the Brewers in the third round of the draft out of Chesapeake High School in Maryland.

Andrzejewski started with the Brewers at rookie Helena. He got into a single game in 1988. He then returned to Helena the next year. In 11 games, 10 starts, Andrzejewski went 3-2, with a 6.13 ERA. In July, Andrzejewski combined with two relievers to strike out 16.

In one game that summer with Beloit, a sharp line drive to his face led Andrzejewski to be carted off the field. He even had the imprint of stitches on his face, William Albert Allard wrote in his book "Portraits of America." Checked out at the hospital, Andrzejewski returned to the team later that night.