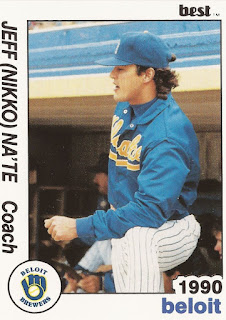 Jeff Nate joined the University of Notre Dame coaching staff in 1988 and head coach Pat Murphy felt lucky to have him, Murphy told The Notre Dame Observer that August.

Nate played in the Phillies system and later coached high school at nearby St. Joe, Mich., The Observer wrote.

"Jeff Nate is one of the most successful high school coaches in the area," Murphy told The Observer.

Nate stayed at Notre Dame two seasons before trying his hand at a higher level, the pros. His stint in the pros lasted another two seasons. He eventually went into a new career, beverage distribution in his hometown in Michigan.

Nate's career in baseball began in 1979, taken by the Phillies in the eighth round of the draft out of Dowagiac High School in Michigan. Nate has also been credited as Jeff Na'te and goes by as Nikko.

With Dowagiac, Nate knocked in a run on a single in an April 1977 game. He went 6 for 10 in a June 1978 tournament, hitting two home runs, as Dowagiac took the district championship.

With the Phillies, Nate started at rookie Helena. He got into 24 games, hitting .239. He then moved to short-season Central Oregon. He got into five games, going 3 for 12, marking the extent of his playing career.

Nate then went on to coach at St. Joe and at Notre Dame. He served as assistant coach in 1989, helping the team to the west regionals.

Nate joined the Brewers for summer 1989. He served as coach in the rookie Arizona League that year, then moved to single-A Beloit for 1990.

Nate has since returned home to Dowagiac, working with his family at Bud Distributing.