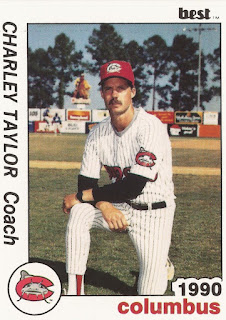 Charley Taylor expected his trip to Houston to be a great experience, he told MLB.com, and he looked forward to it.

After all, the Astros minor league pitching coach had spent the better part of a quarter century trying to shepherd young ball players on to the majors on top of spending seven early seasons trying to get there as a pitcher himself.

"To see this level certainly is exciting for me," Taylor told MLB.com as he prepared for his first look at the bigs. "I've dealt with some of these guys at the lower levels, and some at the Triple-A level, that I got to know last year. It's going to be a fun time."

Taylor's career began in 1969, taken by the Astros in the 24th round of the draft out of Eastern Kentucky University.

Taylor started with the Astros at short-season Williamsport. He moved to single-A Cocoa in 1970, then AA Columbus in 1972. He topped out at AAA Denver in 1974, playing his final season back at Columbus in 1975.

Taylor stayed in baseball, moving to the Reds front office. By 1982, he was back in the minors and back with the Astros. He served that year as pitching coach for single-A Asheville.

Taylor coached at Asheville and AA Columbus through 1990, then five seasons at AA Jackson. For 1996, the Astros named Taylor as pitching coach at AAA Tucson, joining expected manager Tim Tolman, according to The Tucson Citizen.

"Tim and Charley bring a great knowledge of the players with them," Toros general manager Mike Feder told The Citizen. "The nucleus of our ballclub will be from players who have played for those guys."

In 2001, Taylor arrived at single-A Lexington. He proceeded to stay there for eight seasons. More recently, he served as a coach for the Gulf Coast League Astros in 2012.

Taylor received high praise from one of his players in 2006. Tip Fairchild, who never did make the bigs, had perhaps the best run of his short career under Taylor that year at Lexington.

Speaking to The Lewiston Sun Journal of Taylor that June, Fairchild said, "I told my dad that if I make it to the big leagues, it's going to be because of this coach."