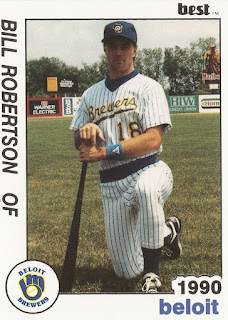 Bill Robertson went on a home run binge for Colorado Mesa University in 1989.

Robertson knocked a total of 21 home runs for the school that year, marking a new record at the school.

Robertson continued to hit home runs later that year, though at a slower pace. He hit five more home runs in rookie ball with the Brewers after turning pro.

He hit just one more home run after that. Robertson played in two pro seasons, making it to single-A Beloit.

Robertson's career began in 1989, taken by the Brewers in the 38th round of the draft out of Colorado Mesa.

Robertson added to his 21-home-run 1989 campaign at Colorado Mesa 71 RBI, according to the school's record book. Those 71 RBI remain tied for 10th all-time at the school. His 21 home runs remain third all-time.

With the Brewers, Robertson started in the rookie Arizona League. He got into 53 games, hitting .259. He hit those five home runs and knocked in 32.