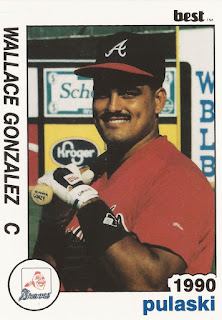 The school had veterans at quarterback and at halfback. One of the veteran halfbacks The Times named was Wallace Gonzalez.

Gonzalez didn't only get offensive praise in football. He also got it in baseball. He got enough that the Braves took notice and made him a pro directly out of high school.

Gonzalez, though, couldn't put up enough offense for a long career. He played four seasons. He never made AA.

Gonzalez' career began in 1988, taken by the Braves in the 44th round of the draft out of Rosemead in California.

With the Braves, Gonzalez started at rookie Pulaski. The catcher got into 11 games, picking up one hit in 22 at bats.

He played 1989 between the rookie Gulf Coast League and single-A Sumter. His season was limited to 17 games. He hit .380.