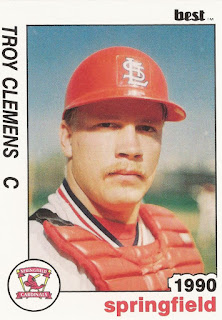 Troy Clemens went to college and played football. He came out of it playing baseball.

Coming out of Boulder City, Nev., Clemens signed on with Foothill College on a referral from a different school, he told The Reno Gazette-Journal.

"I called and contacted coach (Gene) Scattini," Clemens, the school's starting linebacker, explained to The Gazette-Journal in October 1986. "He said there would be kids from Nevada. He said they'd be a good bunch of kids."

Clemens then went on from his athletic experience at Foothill to his professional baseball career. He played seven seasons in the minors with three different organizations. He made it as high as AA, but not the majors.

Clemens baseball career began in 1988, taken by the Pirates in the 31st round of the draft out of Foothill College in California.

Clemens played a single season with the Pirates in the rookie Gulf Coast League. He got into 15 games, hit .135 and was released.

He then signed for 1988 with the Cardinals, playing in the rookie Arizona League. He hit .267 there, over 47 games and made the league All-Star team. He also picked up two doubles and a triple in a July game.

Clemens played 1990 at single-A Springfield. He hit .272 in 105 games there. He then moved to unaffiliated Reno.

Clemens hit a run-scoring single in an August game and singled in another contest that month. He hit .224 in 69 games overall in 1991, largely playing catcher.

Clemens returned for one more season in 1994, getting 39 games at San Jose and four back at Shreveport, ending his professional career,