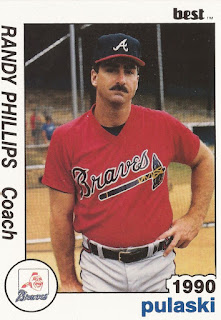 Randy Phillips started as a player, but that never really worked out.

He played on the local Greenville Cardinals semi-pro team in South Carolina. But then came his chance to turn completely pro. It came as a coach in the Braves system. He turned that into a lengthy career.

"I took all that playing and turned it into experience for the coaching," Phillips explained to his hometown Greenville News in 2012. "If somebody was talking about infield play or catching, I would listen in. The bottom line is that if you work as hard as you can, you may not get what you want originally, but you may end up with something better."

Phillips' something better included time in the Blue Jays and Red Sox systems, as well as the Braves, all as a coach. He never saw time in the minors as a player.

Phillips' pro coaching career began in 1990, brought in by the Braves to serve as hitting coach at rookie Pulaski.

Before that, he served as a player manager for the semi-pro Cardinals. He also coached at two high schools, Parker High and West Hampton High, as well as Newberry College and local American Legion in Greenville, according to his card.

Phillips also came from a baseball family. His father Alva Phillips played briefly in the minors and went on to  coach American Legion ball in the Greenville area.

By 1996, Phillips was with the Blue Jays as hitting coach at short-season St. Catharines, then 1998 at rookie Medicine Hat. He made AA Knoxville in 1999.

In 2012, Phillips made the Greater Greenville Baseball Hall of Fame.