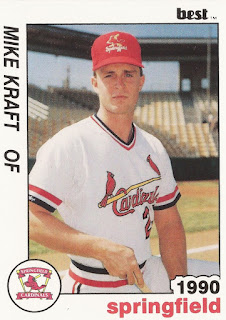 Kraft worked a total of 63 walks for Delta State University in 1988, still the most walks awarded a Delta State hitter in a season. Over his four-season college career, Kraft earned 139 total walks, one off the career record.

Kraft used his college record to walk on to the pros. He played two seasons, one in rookie ball, the other in single-A.

Kraft's pro career began in 1989, signed by the Cardinals as an undrafted free agent out of Delta State University in Mississippi.

At Delta State, Kraft led off the bottom of the fourth with a single in an April 1987 game and later scored.

With the Cardinals, Kraft started at rookie Johnson City. He knocked seven home runs, tied for the team lead. He also led his team in RBI, with 37, and in slugging percentage, .455. He also hit .283 and walked 30 times.