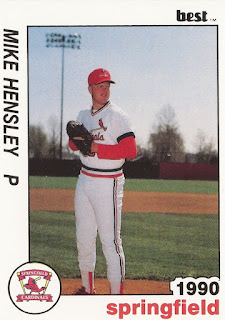 Mike Hensley looked passed a slow, cold start at single-A Springfield in 1990 and toward improving and advancing, according to his hometown Oklahoman.

"They key for me is staying healthy and being consistent," Hensley told The Oklahoman that April. "If I can do those things I'll get a lot of innings in and move right along."

Hensley spoke to The Oklahoman at the start of his third season as a pro. Injuries, though, soon caught up with him. He played five games that season, marking the end of his career.

Hensley's career began in 1988, taken by the Cardinals in the second round of the draft, 53rd overall, out of the University of Oklahoma.

At Oklahoma, Hensley made the Big 8 All-Tournament Team in 1987.

With the Cardinals, Hensley started at rookie Johnson City. He got into 14 games, starting 10, with a 3.91 ERA.

Hensley arrived at Springfield to start 1990, but again injuries struck. In his five outings, four starts, he went 2-1, with a 5.48 ERA, marking the end of his career.

Hensley then went on to coaching - and have a son who also played pro. He served as an assistant coach at Kansas State in 2002 and 2003.

His son Ty Hensley then followed his father to the pros, taken by the Yankees 30th overall in the 2012 draft out of high school. After the father lost his coaching job Kansas State, he got to focus on his son, according to The Lawrence Journal-World.

"That was a blessing in disguise," Ty Hensley told The Journal-World of his father having to leave Kansas State. "Everything has a positive side. It was good for me and it was good for our family."